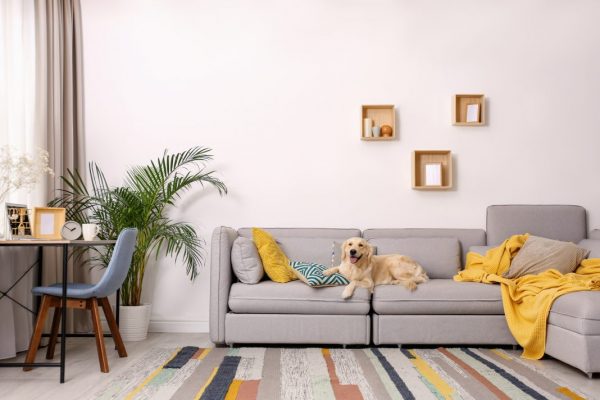 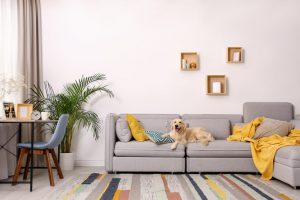 Contemporary & Modern designs are NO MORE confusing. Flip our pages for some brilliant insights by industry experts. Instant wisdom guraranteed!

Think modern and contemporary design are exactly the same?

Well, you’re not alone. While these terms are indeed similar, people often use them interchangeably.

Modern and contemporary design share the following characteristics: minimalist aesthetics, clean, architectural lines, and an open-space feel. However, they ultimately do not refer to the same thing.

So how exactly does one distinguish between these two nearly-identical interior design styles? Read on to find out. 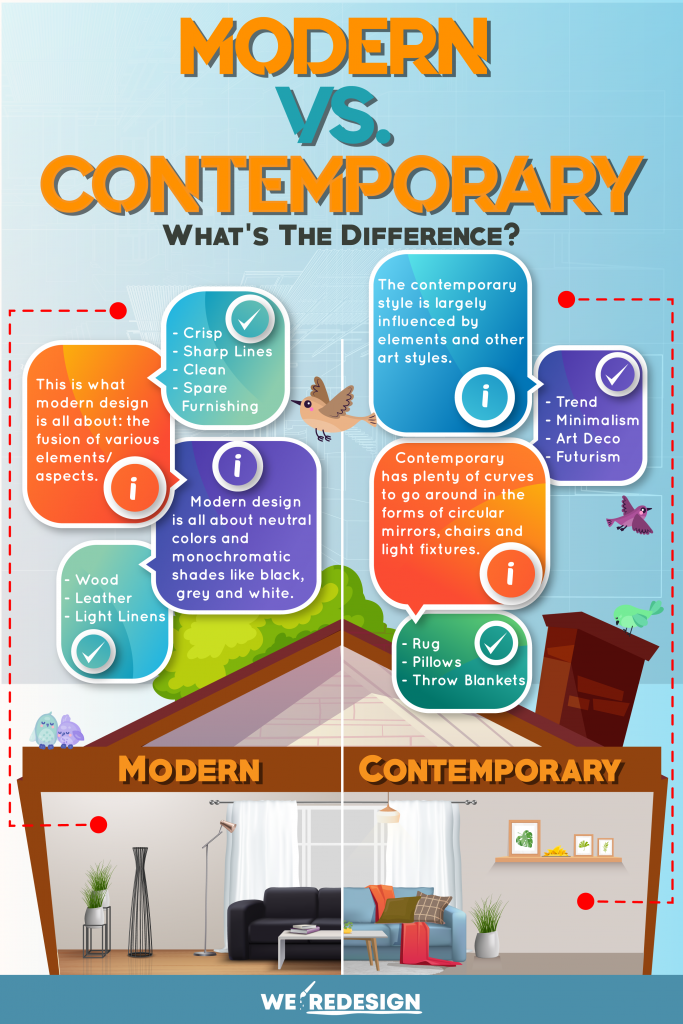 Get Classy With Modern Design 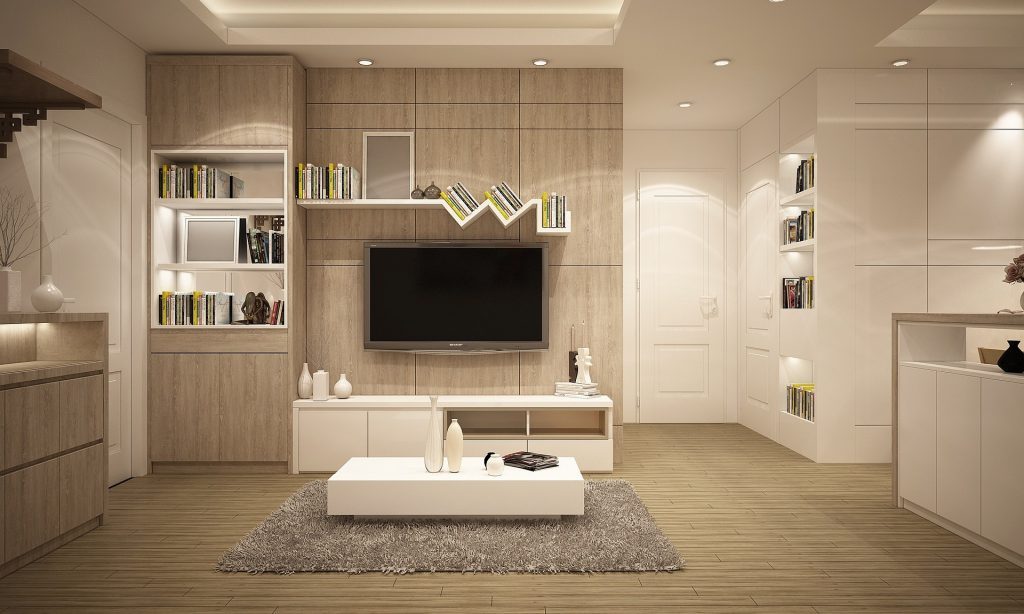 Photo by newhouse on Pixabay

Your Dictionary defines modern design as “a style of decor that focuses on minimalism, neutral colors, clean design lines, and environmentally-friendly materials.”

However, people begin to have different opinions when it comes to the origins of modern design.

Modern design is said to be strongly influenced by Scandinavian and German Bauhaus designs. They believe it was established during the peak of the modern art movement. 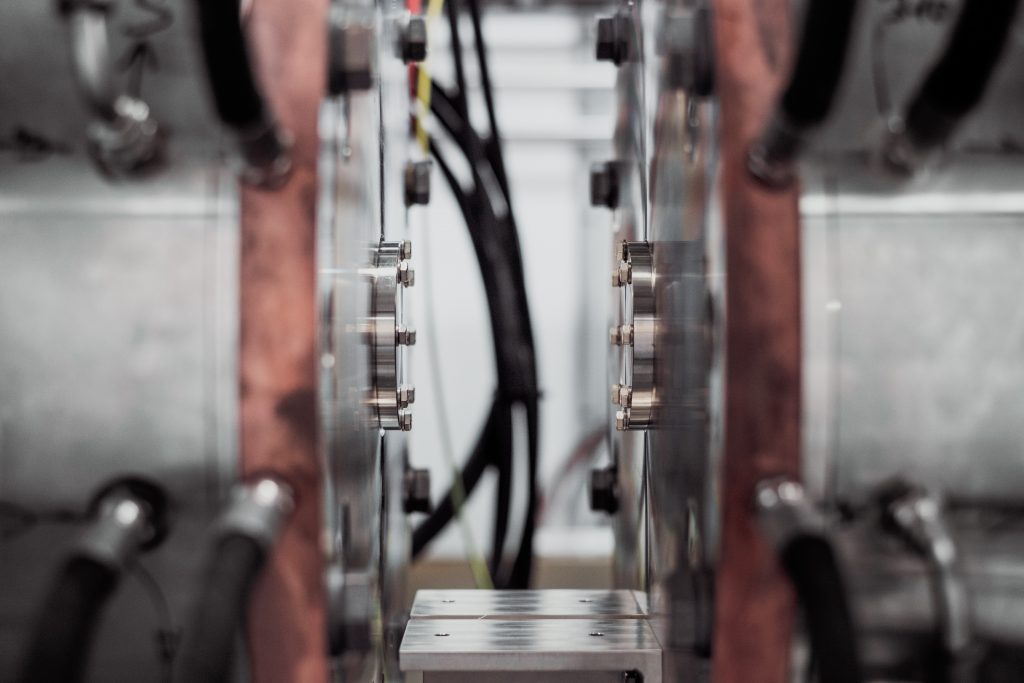 Photo by Samuel Zeller on Unsplash

Another version is that modern interior design’s origins can be traced back to the age of machination, which took place between the 1920s and 1950s.

Then there are also people who associate modern design’s beginnings with the early/mid-twentieth century. Key figures of this era included individuals such as Le Corbusier, Florence Knoll, and Charles and Ray Eames.

Notable features of this interior design style include crisp, spare and sharp lines, and clean, spare furnishings. More often than not, furniture used in modern design is made out of wood, leather, and light linens. 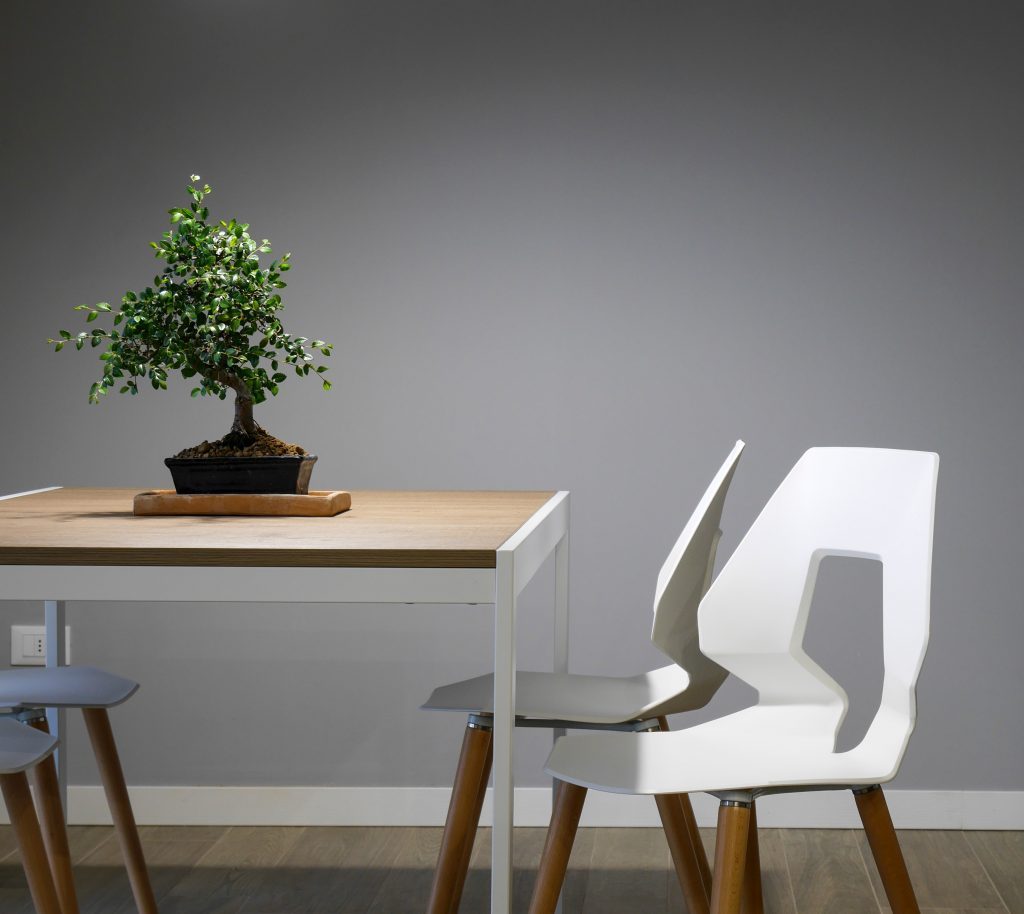 Photo by Davide Cantelli on Unsplash

See the shape of these chairs? It has a structured overall look, with rough and precise lines.

The furniture used is wooden, which is typical of modern designs.

This is what modern design is all about: the fusion of various elements/aspects. 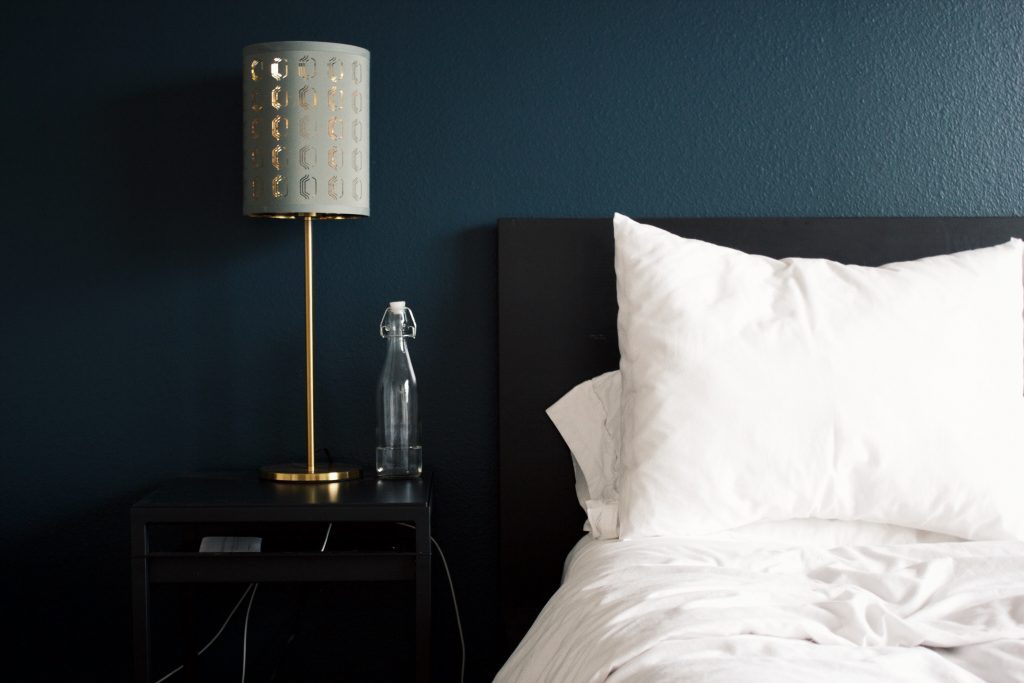 Photo by Rhema Kallianpur on Unsplash

Modern design is all about neutral colors and monochromatic shades like black, grey, and white.

You rarely see very bright colors used in modern design, but it’s usually to highlight something in the room.

In this instance, the lamp’s gold standCheck Latest Price against a dark backdrop makes for a nice juxtaposition. Without it, the entire look might have been dull, uninviting, and a potential mood dampener. 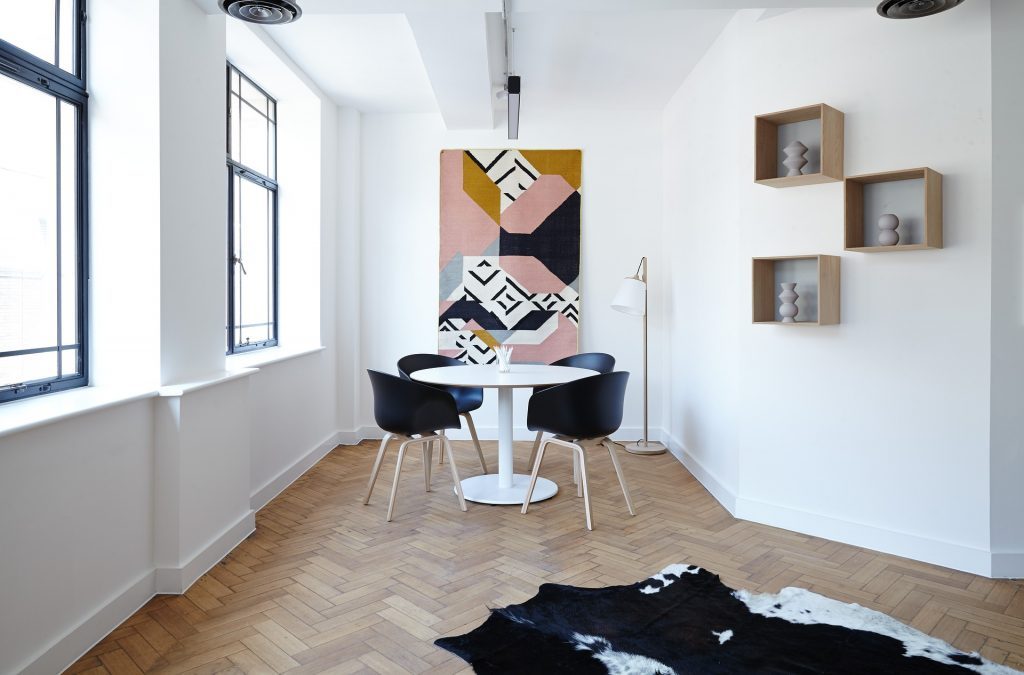 Photo by Pexels on Pixabay

The word “contemporary” can be defined as “of the moment.” Contemporary design, therefore, is largely rooted in the present and what’s trending right now.

In this sense, contemporary can be considered as less of a style and more of a trend. The contemporary style is largely influenced by elements and other art styles. Examples are minimalism, art deco, futurism, and many more.

Popular contemporary artists at the moment include the likes of Iman Issa from Egypt and Raed Yassin from Lebanon.

Contemporary spaces tend to feature rugs, pillows and throw blanketsCheck Latest Price , as well as artfully placed storage shelves. What’s interesting about this style is that it mainly features neutral elements and bold colors but evolves with the passage of time. 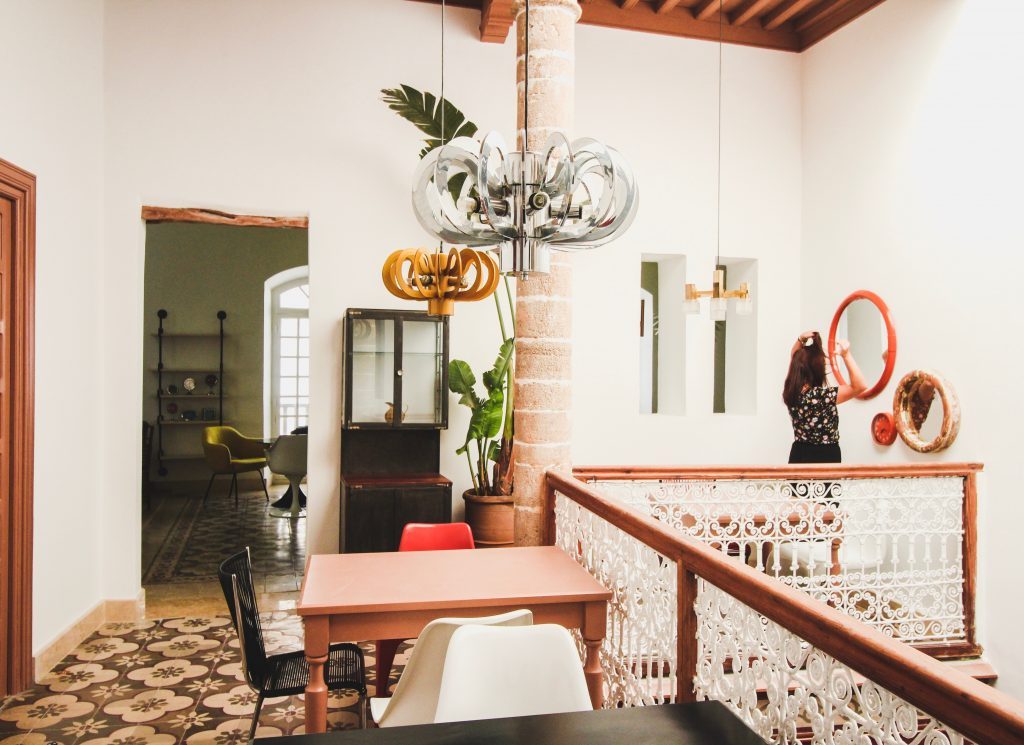 Photo by Louis Hansel on Unsplash

Red and orange accentsCheck Latest Price brighten up this space which is otherwise dominated by neutral tones.

A big characteristic of the contemporary style is the curves that go around in the forms of circular mirrorsCheck Latest Price , chairs, and light fixtures.

Accessories used are big, bold and fabulous while contributing to a rustic/vintage feel, and without being too overwhelming. 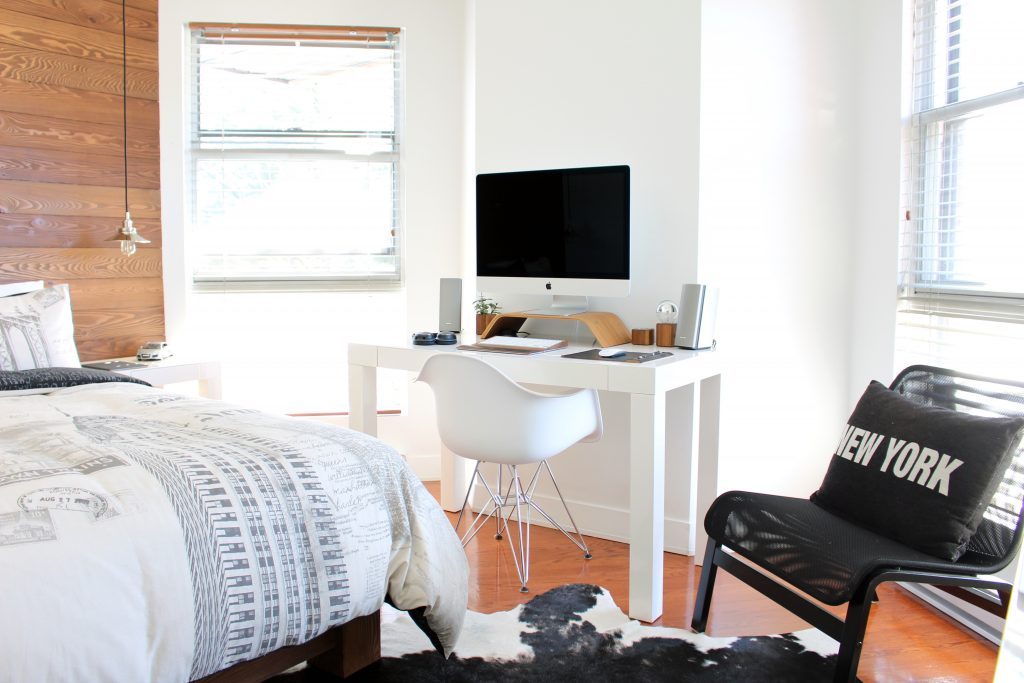 Who says black and white are boring colors? White on white, or even black on black works so long as they’re interspersed by bits of nature like wooden furniture.

This room is proof that any room can become lovely with some graphic printCheck Latest Price , texture, and play on lines. 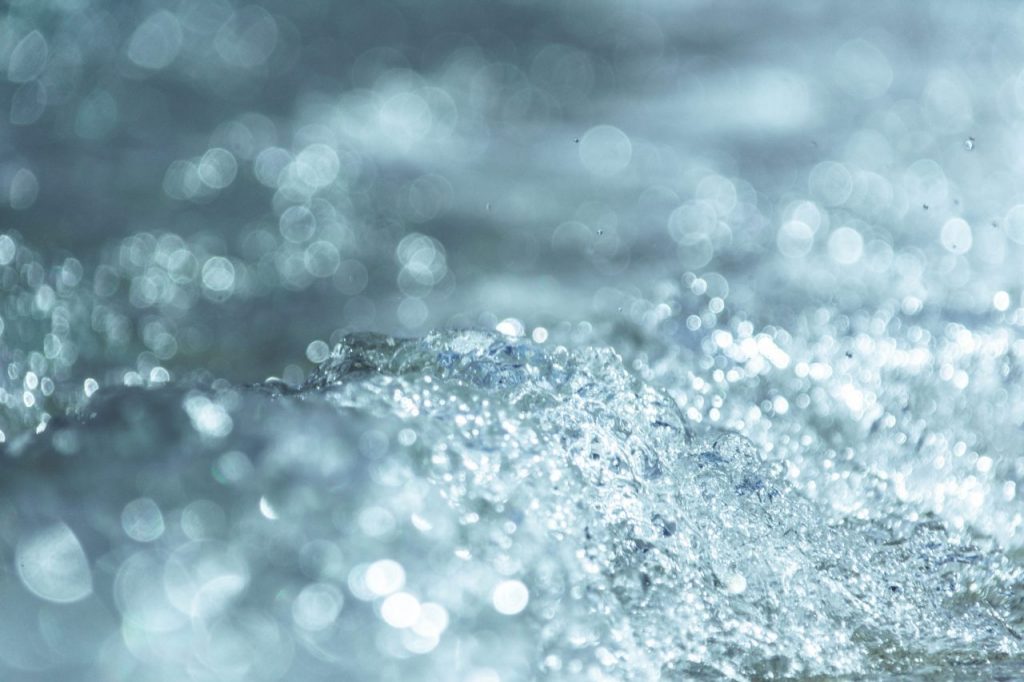 Photo by Artiom Vallat on Unsplash

Unlike modern design, contemporary interior design isn’t set in stone – it constantly changes and evolves with the passage of time. What I mean by that is, what’s contemporary 10 years ago is likely be considered vintage today.

Unlike its contemporary counterpart, modern design can be traced back and is frequently associated with a certain time period. Contemporary design has many trademark features. Two great examples of such are bringing nature into interior space as well as expansive windows.

Modern design, however, remains mostly static. Regardless of the era and changes within the interior design scene, the modern style itself won’t change much. It follows a strict formula that consists of three aspects: balance, clean lines, and minimalism. 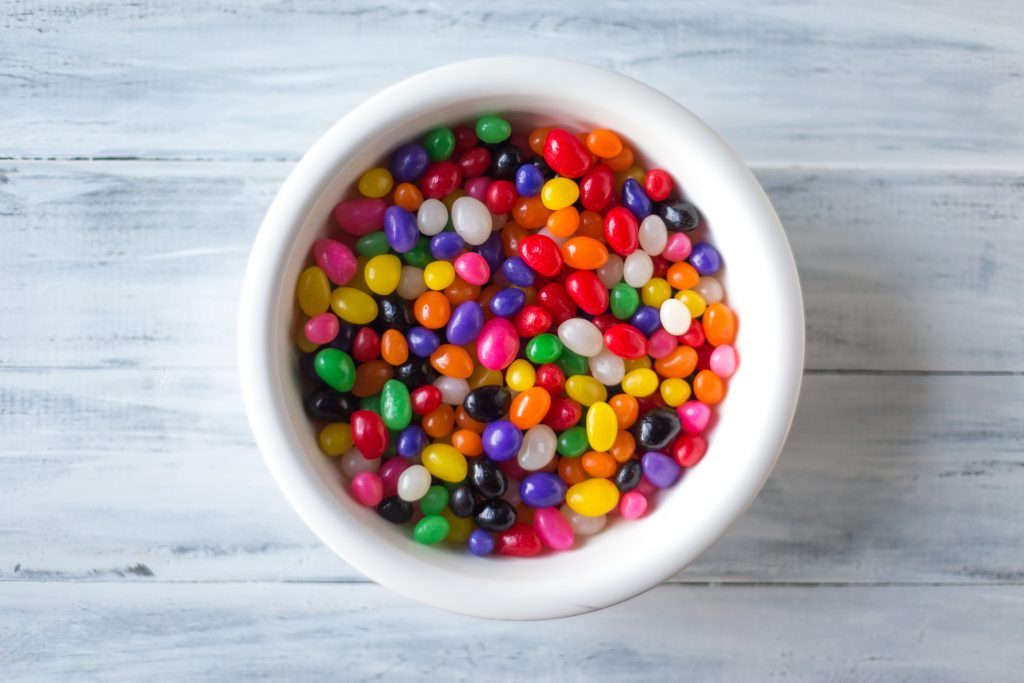 Photo by Patrick Fore on Unsplash

Contemporary design utilizes mainly a monochromatic color palette: white, black, and grey. When colors other than these are added, they are usually pure and saturated ones such as indigo, orange, and red. These colors are loud and meant to create a strong visual impact.

Modern design, on the other hand, features mostly neutrals. Colors used tend to be warmer and more subdued. 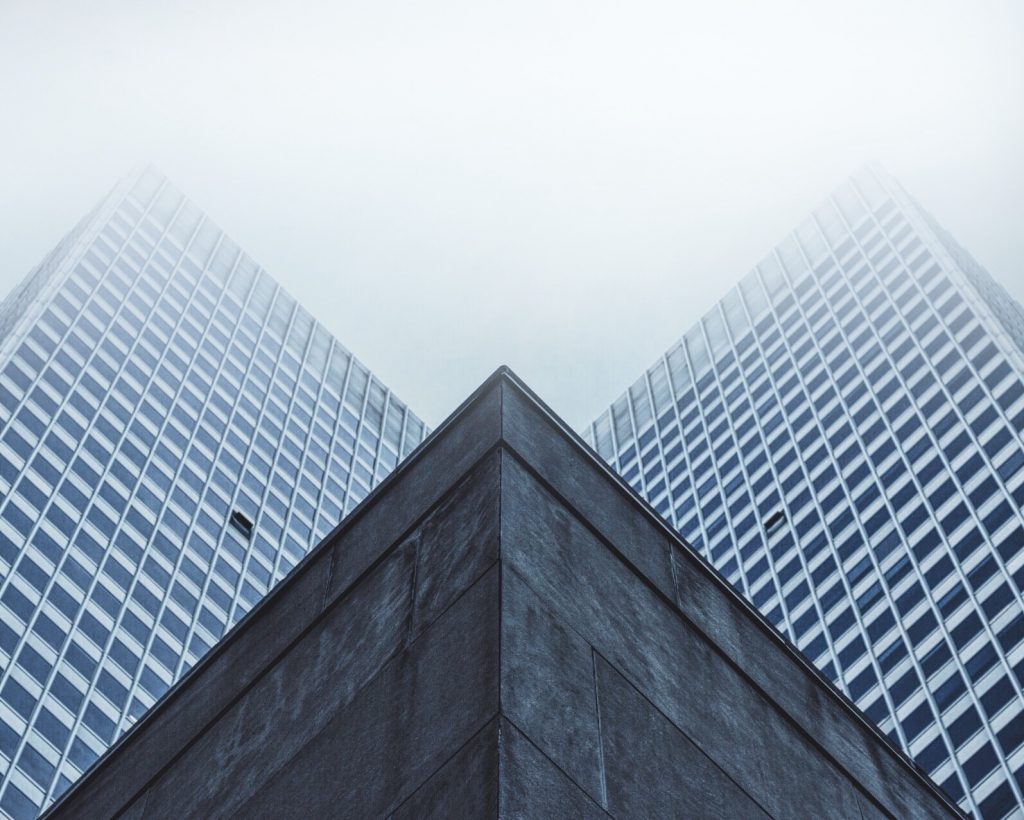 Photo by Patrick Tomasso on Unsplash

Both contemporary and modern designs favor shapes that are crisp and clean. The difference, however, is that contemporary design uses softer and rounder shapes and lines.

Modern design, on the other hand, is bolder when it comes to lines: they often incorporate jagged, oblique, and bold lines that are artfully arranged. 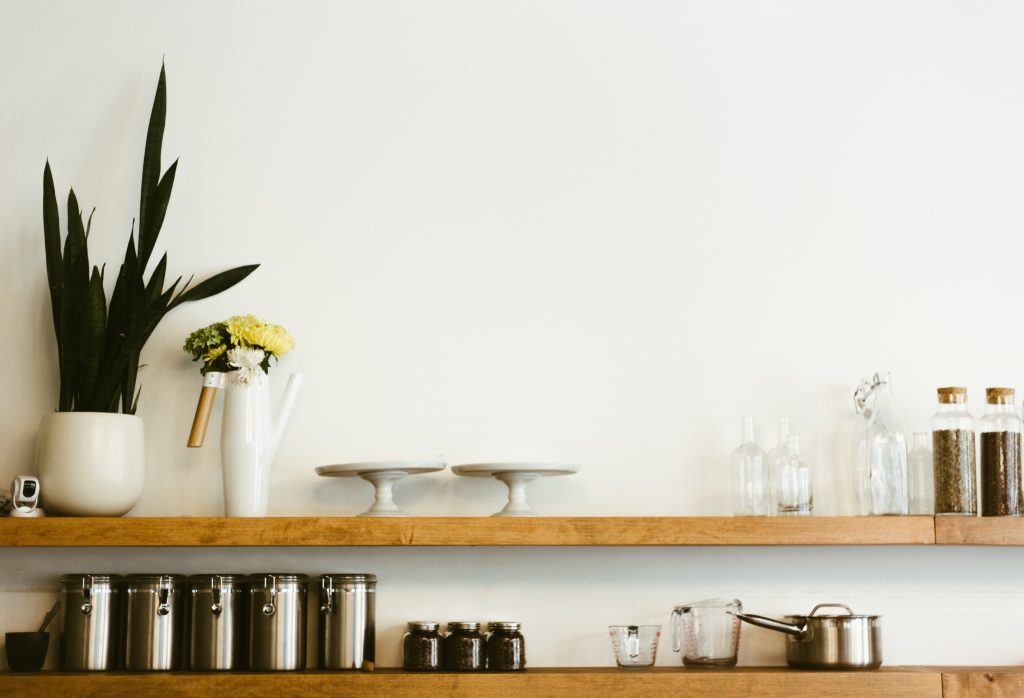 Photo by Allie Smith on Unsplash

Whereas modern pieces of decor usually serve a particular function, contemporary pieces tend to focus on the form itself. 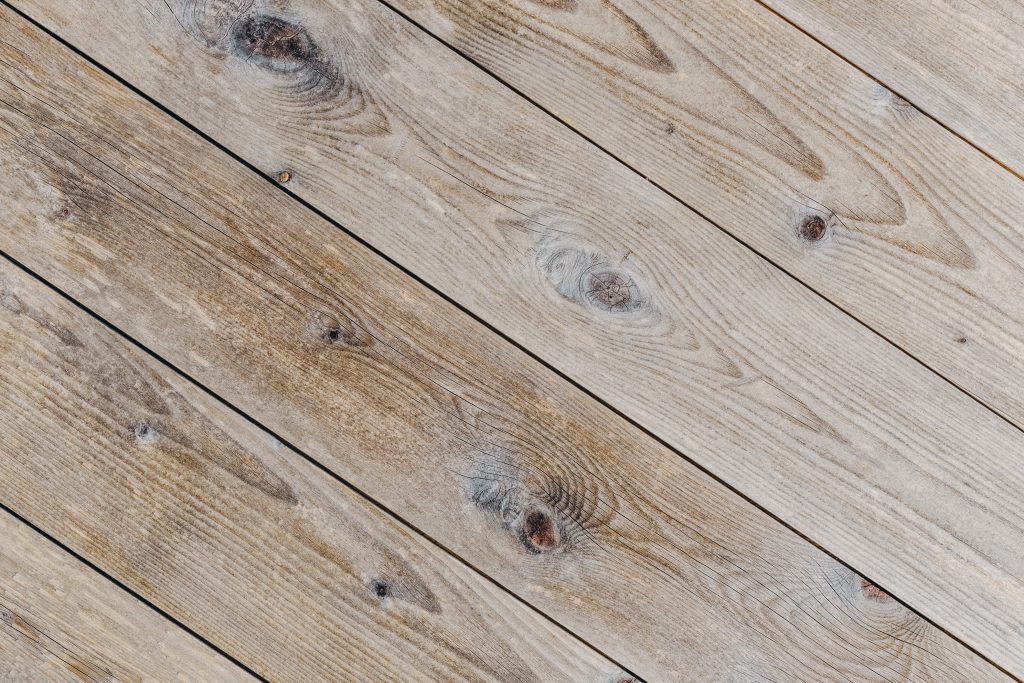 Photo by Alexandre Boucher on Unsplash

For modern design, the materials typically used for furnishings and furniture are natural ones such as leather, linen, and wood.

On the other hand, materials used for contemporary design are mostly state-of-the-art materials such as plastic, metal, and glass. In some cases, engineered wood like plywood and MDF are also used.

And there you have it. We’ve laid out the differences between modern and contemporary design. We hope that our piece helped you learn more and guide you to designing your perfect home. 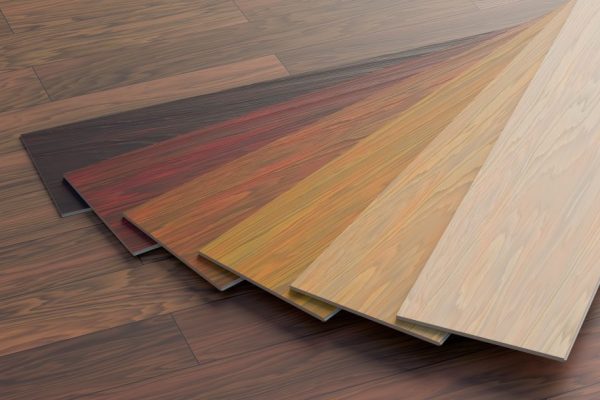 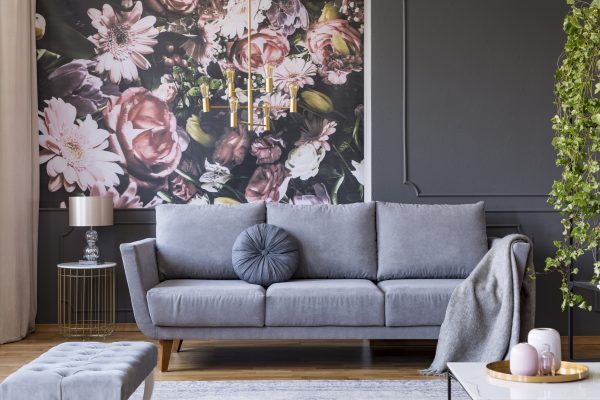 Easy Ways To Incorporate Floral Print Into Your House 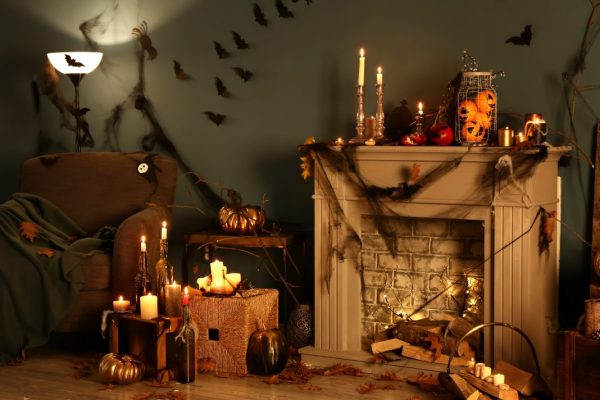 10 Halloween Party Ideas For The Most Memorable Moments 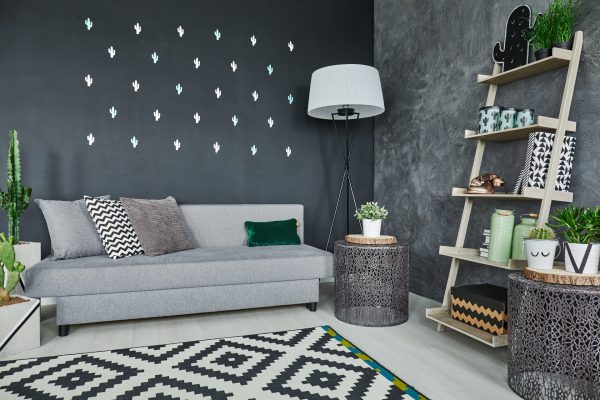 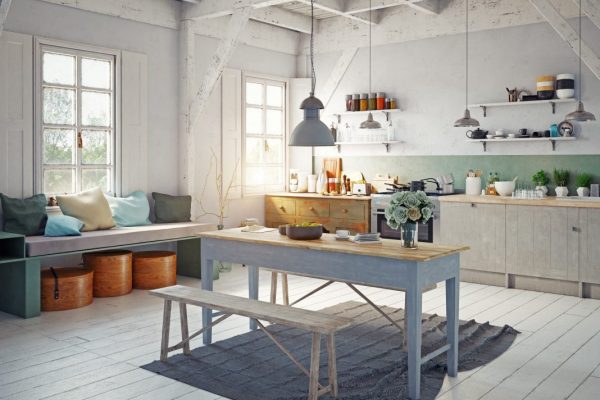 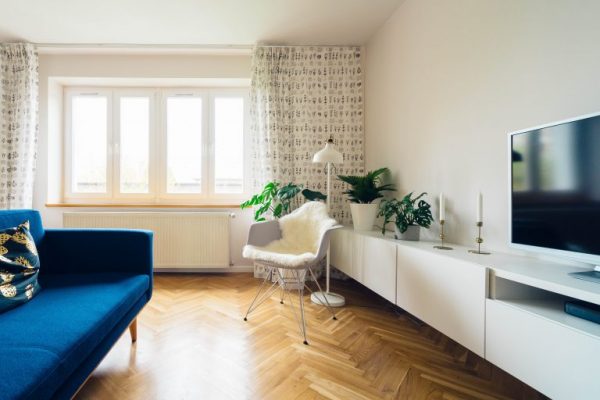 How To Do Rustic Decor The Scandinavian Way 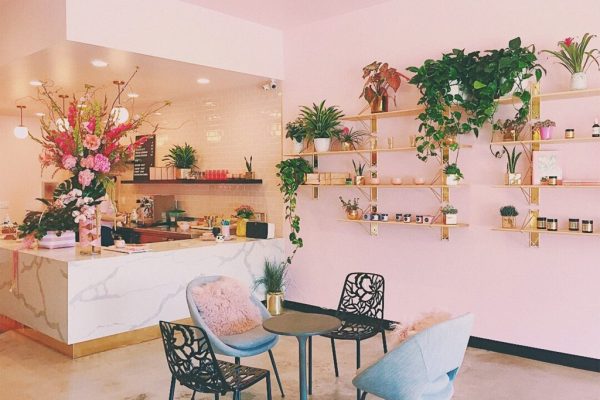 5 Ways To Give Your House A Millennial Pink Makeover 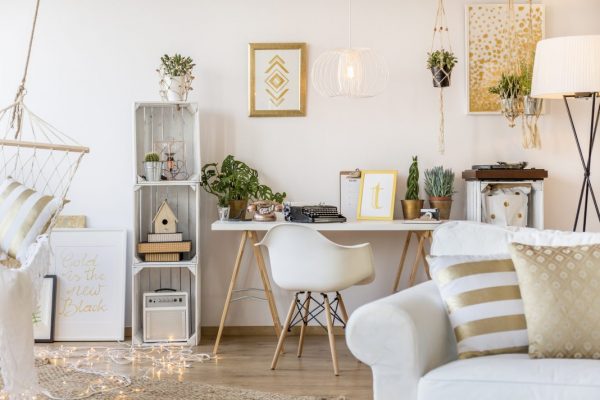